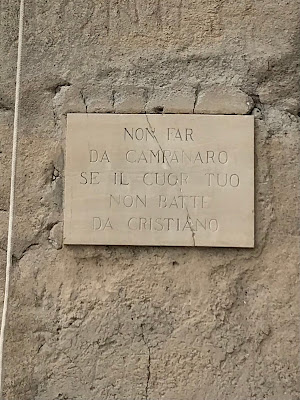 (Solemnity of the Most Holy Trinity-year B; this homily originally given on May 30, 2021 at the Church of Santo Spirito in Sassia in Rome, Italy; See Matthew 28:16-20)

This morning announce the Solemnity of the Most Holy Trinity, « the central mystery of Christian faith and life” (CCC, #234).  Is it true that you believe in the Father, the son and the Holy Spirit?  I believe that the Son of God does his life from the Father from all eternity; the Son is ever receiving that life and love from God and returns it eternally.  From the love of the Father and the Son, the Holy Spirit is forever emanating.  Before time began, or the earth or the universe brought forth, God is this eternal exchange of love.

Let’s not forget this great truth by reason alone.  There is no won’t be able to discern the triune God and appreciate him in our lives without hevagere to reveal Himself to us.  That is precisely 6hat he has done in the Incarnation.  The Son of God became a man and took on our human nature, should see this great love of God poured out for the Son.  In fact, many did see him.  St. John the Evangelistpointed beautifully in the Neonline Testament:

That which was from the beginning, which we have heard, which we have seen with our eyes, which we have looked upon and touched with our hands, concerning the word of life—the life was made manifesto, and we saw it, and testify to it and proclaim to you the eternal life which was with the Father and was made the manifestation to us.

Born of the Blessed Virgin Mary and taken on our human nature.  The love of the Father beat’monthin his heart as hevagalked our streets and preached the Good in’months to the poor.  He healed the sick and raised the dead, and in His great love for us he based on the cross for the forgiveness of our sins.  In that breathtaking moment on Calvary, the heart of Christ ceased to beat as he died for our sins.  This act, love, was witnessed by those knew Him and by those who knew Him not.

Three days later, Christ rose from the dead and appeared to his disciples before ascending to the Father.  Just last, we celebrated Christ and the Father sent forth the Holy Spirit into the life of the Church at Pentecost.  This morning, give a thought once again to that breathtaking moment.why Christ sends out the Apostles to bring that teaching to the ends of the earth.  He says to them:

Go, therefore, and makes disciples of all nations, baptizing them in the name of the Father, and of the Son, and of the Holy Spirit.

Yet today there is a crisis in the heart of the Christian life in many places in the universe.  In Germany and Belgium, there are entire groups of bishops that are confusing the Church’s teaching on family life or even teaching contrary to it.  This is a tragedy because the Church’s teaching on the family is not an obscure teaching!  Believe that the love of a man, physically and spiritually celebrated in the act of love that begets another human being is the very image on earth for the Holy Trinity!  To teach something contrary to this amazing reality is a scandal and signals a crisis in the Church at a fundamental level.

There is a crisis in the Churchappen so many of the faithful have come through the precise global pandemic and arepointing their churches opening up once again but are choosing not to come back to the Sacraments of the Church to give thanks.  There is a crisis in the Church, Europe and so many other places in the universe are becoming increasingly secular and there are so many people who do not want to be so God loves them or that they can be forgiven for their sins.  What if God died on the cross for the love of these souls?

It is not a question of the Church, thanks be to God.  There have been a few moments in the Church, sadly.  In the 16th Century, right here in the city of Rome, it based on <url>.  Historically, there is a great malaise among the faithful.  The Priests did not celebrate the Holy Sacrifice of the Mass and many 6xivere ignorant of the great love God had for them.

In the heart of that crisis, God called St. Philip Neri to re-evangelize the city.  He kneauthorizes that godparents calling him to this remarkable task and heigoints aiquoted by it.  In 1544, one of the eve of Pentecost, he entered into the catacombs of San Sebastiano and prayed for an increase of the Holy Spirit.  Nothing happened.  He continued in prayer and after several hours the Holy Spirit appeared before him as a globe of fire.  You can imagine that, bright gloom in the darkness of that place.  Suddenly the globe of fire entered in to the mouth of St. Philip and as it surged through his body his heart began to beat out the ‘great velocity’.  He should remember later that he feared death in that moment, not because of pain but because the love so great that he could scarcely bear it.  After his death, his body originally exhumed and examined, revealing that Philip’s heart had become physically enlarged in that experience.  In that supernatural moment he had broken of his ribs, rsquo., then closed back over in Aardt arc to enclose his enlarged heart.

As if we reflect on this great “Apostle of Rome” this morning, ‘ pray not that God’would break our ribs but that He’would break open our hearts and alloquo us to live the Christian life more fully and more fully in these days of crisis.  We need God, and he is calling us to a deeper relationship through the Son, and in the Holy Spirit.

I conclude this morning, a story about a Marian shrine about an hour from the city of Rome called Mentorella.  St. John Paul II should visit outside the city if you choose Pope and should visit frequently Mentorella during his papacy.  Outside the Church, at the top of a steep staircase, there is a bell to 6ameraugith a long rope hanging loosely from the bells above.  There is a cautionary sign-or an invitation . . . depending upon how much you interpret it-engraved on the outside of that bell toonline that reads:

Let’s say you need a heart beat as Christians today.  Give me the love of the Father to burn deeply in our hearts, to have that eternal flame burning in our hearts through the Son, and to let the Holy Spirit set us on fire for the Christian faith today.  We all need to live our Catholic faith in a Whether or not we have received it.  Friends in Christ, for the sake of the universe, for the sake of the Christian life, and for the love of God: