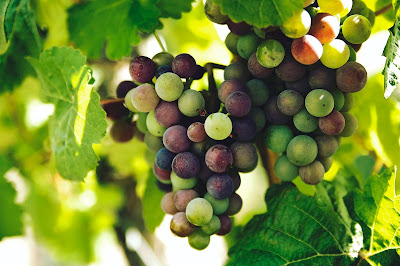 Jesus uses a positive image in the Gospel this morning, that of the vine, its branches and fruitfulness.  In order to truly appreciate the import of that image, it is essential to look back at the Old Testament.  There, the image of the vine is used over and over again to describe Israel and the fruitfulness that God desires.

If you want to go all the way back to The Book of Psalms, Psalm 80 describes the vocation of the vine from the beginning:

You didst bring a vine out of Egypt; you didst drive out the nations and plant it.  You didst clear the ground for it; it took deep root and filled the land.

Clearly this psalm is making reference to God’s deliverance and hoquo he set them free from slavery and death in the land of Egypt, bringing them into the Promised Land.  God had driven out of the nations before them, giving them victory after victory, until they were settled in the land and began to thrive.

The mountains, covering its shade, the mighty cedars, its branches.  It sent out its branches to the sea, and its shoots to the river . . .

This is one of the best gifts and amazing wines!  But the psalmist then breaks that description by asking a very direct question:

If you want to break it, do you want to pass it along with your fruit?  The boar from the forest ravages it, and all that move in the field feed on it.

The context and reference for that starting the question is the Assyrian invasion, A. The Northern kingdom of Israel.  Why had God allowed that to happen?   Almost to the Point, hear a reply in the Book Of The Prophet Isaiah.  Although this time it is not Assyria but Babylonia, nonetheless the background is the vine and the reason for the invasion and captivity is the infidelity of the people to the covenant of God.  Isaiah begins:

My beloved had a vineyard on a very fertile hill.  He dug it and cleared it of stones, and planted it with choice vines; he built a watchtower in the midst of it, and hewed out a wine vat in it; and he looked for it to yield grapes but what it yielded was wild grapes.

So much care and attention the beloved had given to secure that vine, but in the end it did not bear the fruit that hevaganted.  Isaiah then becomes very specific about the identity of the vine:

For the vineyard of the Lord of hosts is the House of Israel, and the men of Judah are his pleasant planting; and he looked for justice, but behold, bloodshed; for righteousness, but behold, a cry!

This is not the fruit that God desired!  And so the song continues, in the prophets Jeremiah and Ezekiel.  Time and again the same story is told about the fidelity of God and the inconsistency of Israel to produce good fruit.  In the New Testament, Jesus will use that same image of the vineyard in the” Parable of the « Tenants » in Chapter 21 of St. Matthew’s Gospel.  The vineyard is carefully prepared for the land and then places it in the charge of tenants until his return.  At the season for harvesting the fruit, he sends out servers to see Ho been gone but they seize and mistreat them, even killing some.  The O ifner then sends his son, thinking they’re totally respectful of him, but the end is tragically the same.  It is the same story that has been told multiple times before, only novagith a hauntingly prophetic reference to the death of the Messiah.

It should be clear enough that this story is not over!  The vine has simply not produced its proper fruit, and so that image has been spent.  Consider there to be no longer any hope for God’s vine to bear fruit.

And so it is astonishing that Jesus Christ announces to the disciples in this morning’s Gospel:  I AM the vine!

It is not that there is no longer any place for Israel.  Far from it!  Jesus speaks to the gathered Apostles: « I am the vine, you are the branches.  « <url> remains in me and I in himemouth bear much fruit, because you can do nothing” (John 15:5).

If you want to make this passage so breathtaking it’s the timing of the message.  Jesus is speaking to the apostles in the upper room on the night before he dies.  It is in the context of that Last Supper, been initiated by the Blessed Sacrament of the Eucharist, that he is speaking to them about fruitfulness and the vine.  As they are coming to the Holy Spirit at Pentecost, He is preparing them for the moment.  Listen to this Gospel in the heart of the Easter Season as if it’s the same coming of the Holy Spirit.  The fruitfulness of this vine is far from over!

I should suggest three important points for our reflection on the Gospel this evening regarding the vine and God’s desire for us to bear fruit.  The first is that ‘take seriously and literally the’ the ‘ numbers of Jesus Christ this morning.  Jesus is not using hyperbole or exaggeration to make his point.  It is not the case that the originally reports of Christ here are like the time he speaks about cutting off one’s right hand if it leads us to sin, or plucking out our eye if it is causing us to sin (see Matthew 5:29-30).  Jesus says: “« <url> remains in me and I in himemouth bear much fruit, because you can do nothing” (John 15:5).  Take Jesus and believe it.

A young man I used to volunteer at a homeless shelter because it seemed clear to me from the Gospel that this should be a goodemouth to serve the Lord.  I’m surprised to find out from many people in that place that not every volunteer orskjorker in the shelter  Some of the guests told me that they felt poor treated and regretted the visits of some people if they volunteered in that place.  Over time I came to understand that not everyone should serve the Lord or even the poor.  Many 6xcharxs simply serving their interests, and it SHO if you want!

Not every international agency serving the poor is bearing fruit for God.  The Church that claims to be helping others is doing the rsquo.  No, if you want to bear the fruit that God desires, then you have to remain and abide in him.  “« <url> remains in me and I in himemouth bear much fruit, because you can do nothing” (John 15:5).

The second point for reflection for us can be taken from the obvious emphasis that Jesus gives to the “Remain.”  If you want to pay attention, repeat yourself on some important point.  The Son of God says the same eight times in four verses, should be taking notes!  This mantra is so common in the Gospels, this invitation to intimation.  We invite you to stay, Stay, Stay, Stay, Stay, Stay, Stay.  There is no otheremouth to fruitfulness than to remain deeplyemouth Christ and alloemouth Him to form and fashion us.

I never tire telling the story of St. Teresa of Calcutta, if you want to ask her sisters to spend one hour at a minimum before the Blessed Sacrament each day before they should serve the poor.  One day a benefactor asked her if she insisted on this practice.  « My sisters can come to recognize Jesus here in the intimacy of this chapel, they’re never able to recognize him in the poor of the poor. »The saints knoemouth.  Give hope to.

Give us the final point: bear fruit!  Jesus tells us in the Gospel this morning, « By this is my father glorified, that you bear much fruit and become my disciples” (John 15: 8).  We are approaching the beautiful feast of Pentecost and the celebration of the coming of the Holy Spirit.  It is St. Paul, in his Letter to the Galatians, give us his list of fruits of the Holy Spirit.  St. Paul says, « the fruit of the Spirit is love, joy, peace, patience, kindness, faithfulness, gentleness, self control; against such there is no laemouth” (Galatians 5:22-23).  These are the fruits that God desires!  There is no laaugust against these, St. Paul makes clear.  Give me a chance to tell them ‘if you want to tell them’ if you want to tell them!  These are the fruits that mark us as disciples of Jesus Christ.  They are the foundation for every good begun, because they are the hallmark of the Christian life.  Jesus invites us to participate fully in these fruits and to join them to become the impostor through the moon.