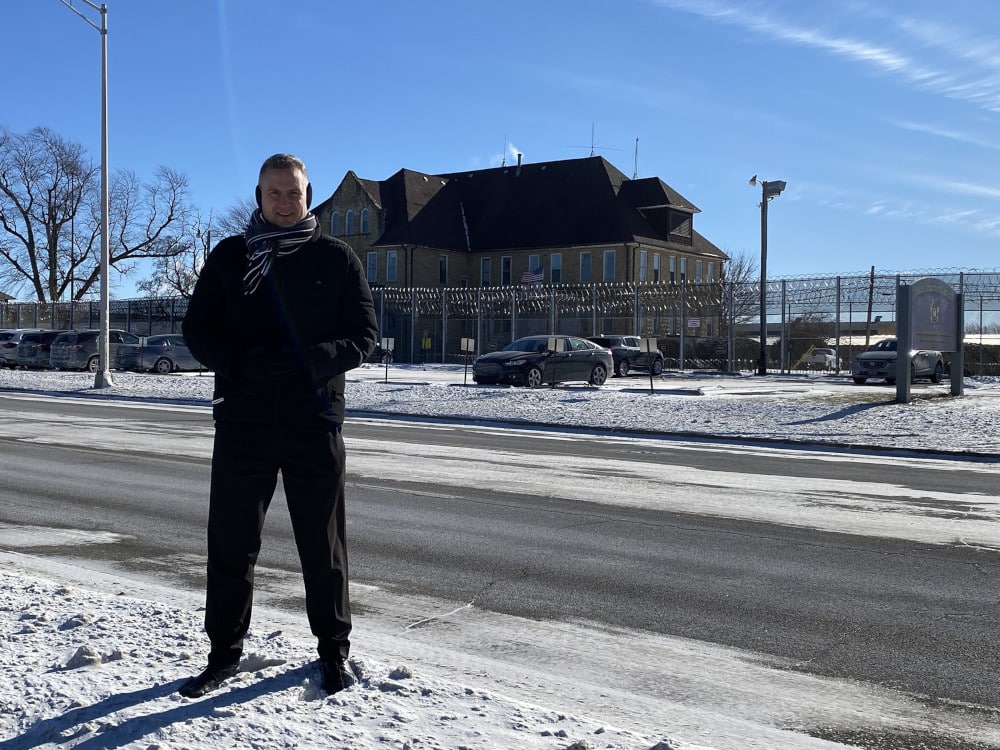 On Christmas Day, Joliet’s Catholic bishop introduced himself to the 11 men attending the 10:15 a.m. Mass at the Joliet Treatment Center.

« I’m Bishop Ron Hicks of the Diocese of Joliet, » he said. « I grew up at 155th and Woodlawn. I’ve been a priest for 28 years, a bishop for four years, with two years here in Joliet. It’s a great blessing for me to be here with you today. »

« Here » was the library in the vocational building of the 55-acre site located on the city’s southwest side that treats male inmates diagnosed with mental illness from Illinois Department of Corrections prisons located across the state.

Fr. Louis « Louie » Tosto, senior chaplain for the center, said staff treat a diversity of conditions among the residents of the more than 400-bed facility, including bipolar disorder, depression, attention-deficit/hyperactivity disorder and post-traumatic stress disorder.

Hicks said when Louie invited him more than six months ago to celebrate Mass at the center, he immediately said « yes. »

« With this visit, I represent the entire Catholic Church, » he said. « This is where we are supposed to be. We are the face of Christ. »

As the 11 men filed into the blue- and yellow-painted room lined with books and flanked by two security cameras in the ceiling, Hicks greeted each one with a fist bump and a « Merry Christmas. »

The men varied in age and ethnicity, and all chose to skip the « chow » line to attend Christmas Mass with the bishop.

A 29-year-old man with shoulder-length red hair thanked the sixth prelate of the diocese.

« It’s a blessing for you to take time — someone of your high prestige — to come here. I’ve been here four years and I’ve never seen anything like this, » he said to Hicks, adding, « I’m not a very good Catholic. »

In his homily, Hicks expanded upon that shared Catholic faith by reflecting on the recent film rendition of the story of Pinocchio, the wooden puppet who longed to be a real boy. Hicks said when a priest friend suggested he watch the newest version of the traditional children’s tale, he at first rejected the idea.

But he changed his mind, and discovered elements of faith, spirituality and theology in the film: A crucifix hangs on the wall of the bedroom shared by Geppetto and Pinocchio, and the two attend Mass at the Catholic church in the village.

A pivotal scene occurs when Geppetto and Pinocchio are in the church alone, as the carpenter repairs the broken crucifix behind the altar, Hicks said.

« Pinocchio points to the crucified Jesus, and says, ‘Papa, there is something I don’t understand,' » Hicks recalled from the film. « ‘Why is it everyone loves him? Everyone likes him. He’s made of wood, I’m made of wood. Why is it no one loves me?’

« And Geppetto tells Pinocchio, ‘They don’t love you because they don’t know you yet,' » Hicks said.

That feeling of being unlovable is part of the human condition, Hicks told the men, yet « it’s a lie that’s planted deep and dark inside every one of us. »

« You’re lovable and you’re likable because you — we — are all made in the image of God. We’re beloved, and we’re loved unconditionally.

« You may think, ‘Does God know what I’ve done?' » Hicks said. « Yes, he knows everything about you, and you are still beloved. »

He then asked and answered questions universal to Catholicism and Christianity.

« Are you lovable? Yes. Are you likable? Yes. Is salvation yours? Yes. Where does it come from? It comes from the birth of Jesus that we celebrate today. »