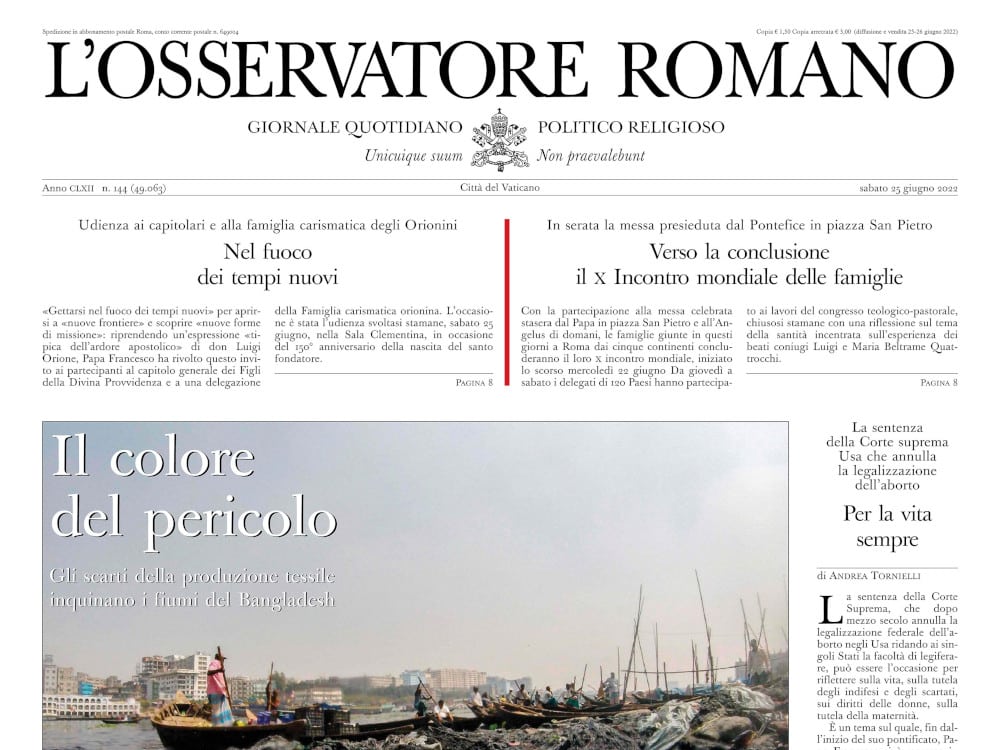 Recent popes have used the concept of a « Petrine principle » and a « Marian principle » to describe the important role women and men together play in the Catholic Church, but a biblical scholar writing in the Vatican newspaper said it is time to talk about the discriminatory and stereotypical notions behind it.

The question must be asked: « Doesn’t the Marian-Petrine principle express an ideology and rhetoric of sexual and gender differentiation that has now been exposed as one of the covers for patriarchal privileges? » wrote Marinella Perroni, a retired professor of biblical theology at the Pontifical Atheneum of St. Anselm in Rome.

Her article Dec. 12 in L’Osservatore Romano, the Vatican newspaper, was in response to Pope Francis’ most recent use of the dual principle in an interview with the Jesuit-run America magazine in late November.

« The church is more than a ministry. It is the whole people of God. The church is woman. The church is a spouse. Therefore, the dignity of women is mirrored in this way, » the pope told America magazine. « Why can a woman not enter ordained ministry? It is because the Petrine principle has no place for that. Yes, one has to be in the Marian principle, which is more important. »

Perroni said the Petrine-Marian principle was first formulated by the Swiss theologian Fr. Hans Urs von Balthasar in the 1970s to combat an « anti-Roman » sentiment among some Catholics and to insist that the hierarchical structure of the church and its living community of believers called to holiness and to bringing Christ to the world must go together.

Sts. Paul VI and John Paul II as well as retired Pope Benedict XVI and Francis have used the principle « to talk about the life of the church and, above all, about the participation in it of women and men, » Perroni wrote.

In the formula, she said, « it is immediately intuited that Mary is the prototype of the feminine and Peter is the prototype of the masculine, and it is clear that when the popes use the formula of the ‘Marian-Petrine principle,’ they want to affirm that everyone, women and men, should feel at home in the church because it is a place where the relationship between masculine and feminine is one of close reciprocity. »

« At the beginning of the third millennium, however, a reciprocity that assigns to women the charism of love and to men the exercise of authority should at least give us pause, » she wrote.

Perroni quoted Pope Paul’s 1974 document on Marian devotion where he explained that with Mary, God « has placed in his family, the church, as in every home, the figure of a woman, who in a hidden manner and in a spirit of service watches over that family and carefully looks after it until the glorious day of the Lord. »

The popes, including Francis, have insisted that the Marian principle and feminine role in the church is more important than the ministerial and authoritative role of St. Peter and his successors, Perroni wrote, even if the Marian principle characterizes the role of women as « maternal » and « domestic. »

Acknowledging the church needs a more profound « theology of women, » she said, Francis « struggles to free himself from the patriarchal vision » that reserves authority to men and loving to women.

Using the binary Petrine principle and Marian principle is « seductive » because it is simple, Perroni said.

But it is problematic because it stereotypes the differences between men and women and gives them a hierarchical value, she said. The feminine is presented as domestic, interior, welcoming and spiritual, while the masculine is presented as ministerial, authoritative and powerful.

However, Perroni wrote, it is « quite clear that forms of the mystical exaltation of the feminine are directly proportional to the refusal of public recognition of women’s authority. »

« The masculine-feminine bipolarity, » she said, featured « obsessively » in Catholic theology when it was « totally androcentric and patriarchal, » but it has lost credibility « since women first became the ‘women’s issue’ and then, having shaken off this offensive expression, became full protagonists in social, political and ecclesial life. »