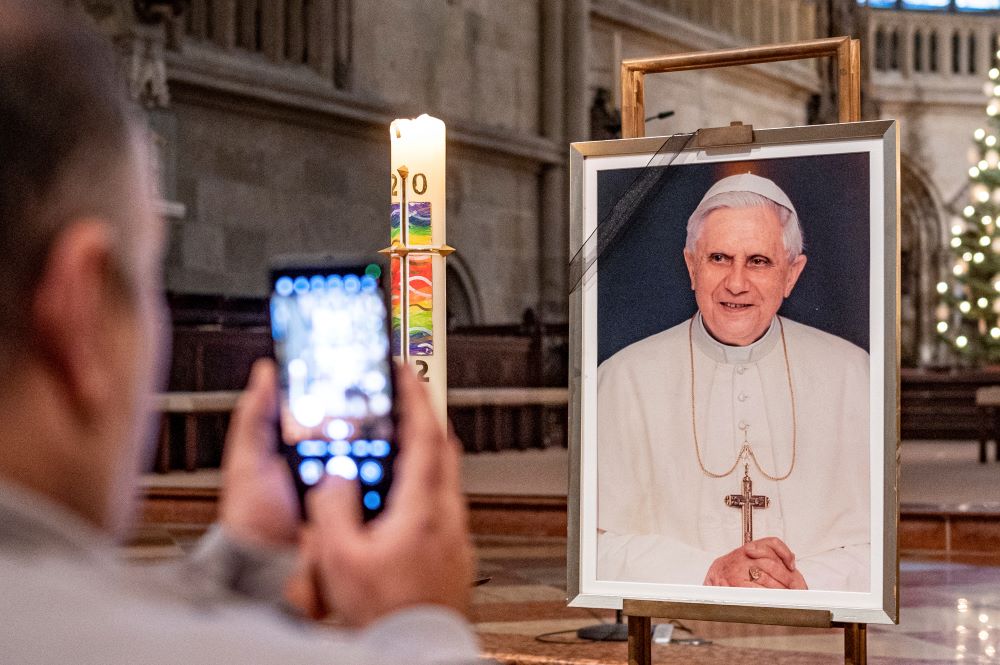 Within minutes of the announcement of the death of Emeritus Pope Benedict XVI on Saturday morning, a wealth of tributes flowed in from around the world, while the Vatican revealed that the late pontiff would be given a « simple » funeral, celebrated by Pope Francis, in keeping with his wishes.

Words of praise and fond remembrance were offered by world leaders and religious figures, including the archbishop of Canterbury and Jewish advocates.

But some others, including LGBTQ+ advocates, were restrained in marking the passing of 95-year-old Benedict, Before being elected pontiff in 2005, as Cardinal Joseph Ratzinger he had long served as the Vatican’s doctrinal watchdog, ensuring unwavering orthodoxy on issues including homosexual activity, which the Catholic church considers a sin.

Vatican spokesman Matteo Bruni said that Francis will celebrate a solemn funeral in St. Peter’s Square on Thursday with rites that, « following the desire of the pope emeritus, will be carried out in the sign of simplicity. »

Benedict spent two more years in papal retirement than in the actual papacy, which had begun in 2005. Benedict died in the austere Vatican monastery where he had resided since shortly after shocking the world by retiring in 2013. Frail for years, Benedict’s health worsened earlier in the week, according to the Vatican.

Starting on Monday, the faithful will be able to file by his body in St. Peter’s Basilica.

In the midst of the mourning, Francis was going ahead with traditional year-end ceremonies, including a Vespers service early Saturday evening in St. Peter’s Square and a New Year’s Day Mass on Sunday in St. Peter’s Basilica. The Catholic church dedicates Jan. 1 to the theme of peace, a subject dear to Francis, who has repeatedly decried Russia’s war in Ukraine and other longer-running conflicts in the world.

Francis would also keep to his tradition of strolling by the life-size creche scene in the square, the Vatican said.

While that appearance is usually joyful, Benedict’s death hours earlier in the day was expected to bring a more subdued mood.

As the death announcement came, quietly by email from the Vatican press office, hundreds of tourists were admiring a towering Christmas tree in the square, many unaware that Benedict had died in his secluded residence in the Vatican Gardens.

Benedict « prayed in silence, as one should do, » said Fabrizio Giambrone, a tourist from Sicily who recalled the late pontiff as a « very good person » who lacked the « charisma » of his predecessor, St. John Paul II, and of his successor, Pope Francis.

Laura Camila Rodriguez, 16, visiting from Bogota, Colombia, with her parents, said she was traveling on a train bound for Rome earlier on Saturday when she learned of Benedict’s death.

« It was a shock, but it’s probably good for him that he can now rest in peace, at his age, » she said. « I think Francis is a good pope, he was a good successor, able to head the Catholic Church. »

While the bells of St. Peter’s Basilica didn’t toll to mark the death announcement, in the somber air in the small Bavarian town where Ratzinger was born in 1927, church bells tolled solemnly at St. Oswald Church in Marktl am Inn, a German town near the Austrian border.

In Krakow, one of Poland’s oldest and biggest church bells that is used to mark events of national significance, the Sigismund Bell, tolled at noon, and a special Mass for Benedict was planned for that city’s Wawel Castle Cathedral in Benedict’s honor later on Saturday.

Poland is a heavily Roman Catholic country where a conservative government is in power. President Andrzej Duda tweeted that Benedict is « one of the most outstanding theologians of the 20th and 21st century. » He called Benedict’s teachings a « guidepost among the many winding and deceptive paths of the contemporary world. »

The American Jewish Committee in a statement from New York praised Benedict for having « continued the path of reconciliation and friendship with world Jewry blazed by his predecessor, John Paul II. » The organization noted that the German-born Catholic church leader had « paid homage in Auschwitz » to the victims of the Holocaust and had made an official visit to Israel.

« He condemned antisemitism as a sin against God and man, and he emphasized the unique relationship between Christianity and Judaism, » the statement said.

Praise for Benedict’s religious devotion came from the archbishop of Canterbury, Justin Welby. « In his life and ministry, Pope Benedict XVI directed people to Christ, » the Anglican leader tweeted.

« I join with Pope Francis and all the Catholic Church in mourning his death. May he rest in Christ’s peace and rise in glory with all the Saints. »

Dubbed « God’s Rottweiller » for his fierce defense of Catholic teaching in the decades that he led the Vatican doctrinal orthodoxy office, Benedict was viewed less enthusiastically by some for his stance on homosexuality and against women’s desire to break with the church’s ban on female priests.

In that role, Ratzinger « had an outsized influence on the Church’s approach to gay and lesbian people and issues, » said Francis De Bernardo, executive director of the U.S.-based New Ways Ministry, which advocates for LGBTQ+ Catholics. He noted that Ratzinger in 1986 helped shape a document that called homosexual orientation as « an objective disorder » and his involvement in a 1994 Catechism describing sexual activity between people of the same gender as « acts of grave depravity. »

« Those documents caused — and still cause — grave pastoral harm » to many LGBTQ+ people, De Bernardo said, while noting that his organization was praying for the repose of Benedict’s soul.

Francis has used his papacy to try to set a less judgmental tone against gay Catholics.

While hailing Benedict’s « profound example of humility and willingness to overturn tradition » by resigning, advocates for opening up the priesthood to women expressed dismay over his refusal to embrace their aims.

« For many Catholics, Pope Benedict’s papacy is a chapter of our church’s history that we are still healing from, » said Kate McElwee, executive director of the Women’s Ordination Conference. « His relentless pursuit to stifle the movement for women’s ordination revealed a man unwilling or unable to engage with the urgent needs of the church today. »

Nicola Zolezzi, 58, on vacation from Genoa, Italy, with his family, said he was sorry to learn of Benedict’s death while heading to St. Peter’s Square.

« Maybe he wasn’t that close to the people like Francis or John Paul II, but I think he was a good person and carried out his role well, » he said.

Still, Zolezzi added that « we still wonder what was the real reason behind his decision to leave. »

Benedict had explained that he was relinquishing the papacy because he felt he know longer had the strength to adequately shepherd the Catholic church and its then 1.2 billion members.

Paolo Santalucia in Vatican City, Monika Scislowska in Warsaw, Poland, and Geir Moulson in Berlin, contributed to this story.