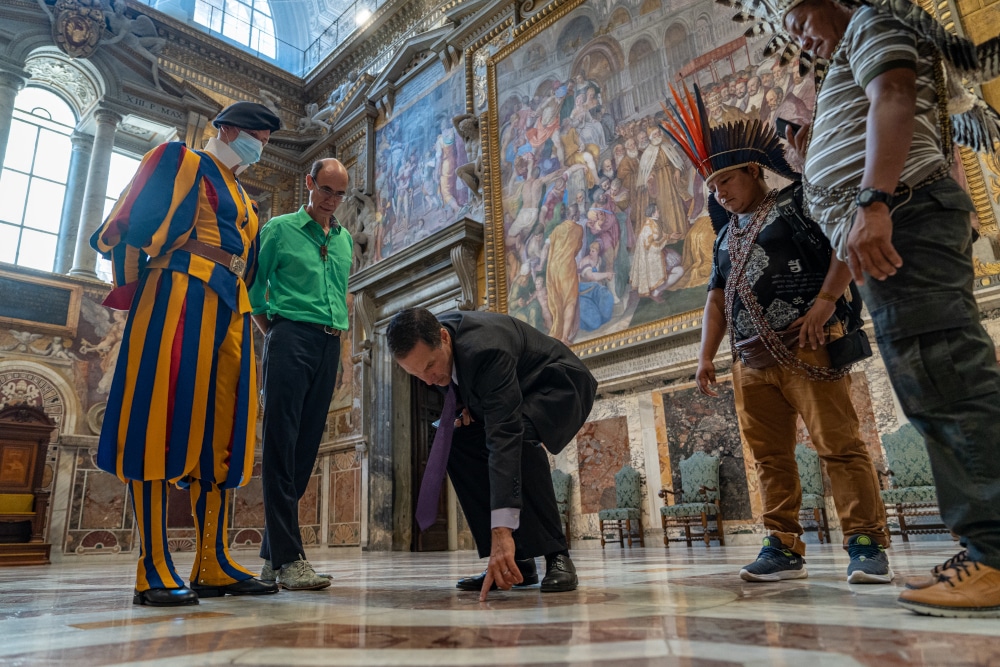 Amid an ongoing global pandemic and increasing corporate greed and arrogance, the producers of « The Letter: A Message for Our Earth » believe the messages of Pope Francis’ 2015 papal encyclical « Laudato Si, On Care for Our Common Home » — the first one to elevate care for the earth as its main concern — are more urgent than ever.

The artistically flawed documentary is nonetheless enlightening and moving, sobering yet hopeful. It will debut at 8 p.m. Dec. 21 on PBS but broadcast times may vary and viewers should consult their local listings. The film will also be available to stream at PBS.org.

A collaboration between the Laudato Si’ Movement and the Vatican, « The Letter » was directed by Nicolas Brown, the British filmmaker best known for 2018’s « The Serengeti Rules. » Brown structures the film around a dialogue the pope conducted in August 2021 at the Vatican with climate activists representing perspectives the pontiff highlighted in his encyclical.

The activists’ stories are as impressive as they are inspiring. The Saharan drought compelled Kandé to move to the city of St. Louis, Missouri, when he was 6-years-old. Forced to beg on the streets, he found refuge in the Maison de la Gare, a non-profit that « helps struggling qur’anic students integrate into society. »

Committed to his home country and now in his 20s, Kandé is determined to become a leader in his village. He witnesses the devastation caused by rising sea levels in the western African nation, where the filmmakers say more than 3,200 people have lost their homes. This reality engendered many in the country to join the growing ranks of climate refugees, projected to be as many as 1.5 billion people by 2050, according to the film.

Because of his outspoken protection of the Brazilian Amazon, Borarí says men pointed guns at his head and tied him to a tree. He dates his concern for deforestation to 2002 when « the peace and quiet ended when logging companies started to subdivide and occupy the land and manage the territory. » The indigenous leader says that some in Brazil « want to turn the Amazon into a financial market » and « extract mineral and harvest wood. »

The documentarians note that since 1978, an area twice the size of Spain has been lost to deforestation in the Amazon; but as the stewards of 80 percent of it, indigenous people will play a critical role in preserving the world’s biodiversity.

The Kedarnath Floods informed 15-year-old Pandey’s activism at a tender age. Striking the North Indian state of Uttarakhand in June 2013, five days of heavy rain precipitated landslides that swept up homes and people, killing more than 5,700. The natural disaster galvanized the young woman many call India’s Greta Thunberg. From Pandey’s viewpoint, the problem of climate change is more personal and urgent for the world’s youth than it is for older generations.

« My generation is the most vulnerable right now, » she says, « and we are going to be most affected in the future as well. »

The precarious future of coral reefs is the focus of the life work of Asner and Martin, the final participants in the papal dialogue. Their high-tech environmental mapping system allows them to gather data on the reefs from images taken from planes. « My office is one of the coolest places on earth, » Martin says of the reefs where she swims to compare her observations with the mapping system data. The film notes that 25 percent of marine life depends upon coral reefs, but marine heat waves alarm the married scientists. If temperatures rise two degrees Celsius, up to 99 percent of coral reefs could die, the documentarians observe.

Hushed reverence, awe and disbelief describe the reactions from the quintet when they meet the pontiff. Kandé likely speaks for all when he says, « I grew up in a society that ignores people like me, so I could not have imagined having this opportunity. »

The pope’s warm, natural way with his company puts them and us, the viewers, at ease. In showcasing Francis’ gift of accompaniment and accessibility to the faithful and the press — one of his papacy’s hallmarks — « The Letter » distinguishes itself from similar documentaries.

Speaking in Spanish because, he says, his « heart is in Spanish, » Francis’ message to the activists aptly reinforces « Laudato Si’. » « We are building a tower of human arrogance, » he says, « and nature is screaming: stop. Unity means saving mother earth, saving biodiversity, saving ourselves and each other. »

As far as art and storytelling go, « The Letter » is admittedly flawed. The use of Billy Williams’ 1957 recording of the jaunty « I’m Gonna Sit Right Down and Write Myself A Letter » to introduce us to the documentary’s theme and protagonists felt overly whimsical for such a serious film, and viewers will likely be frustrated by the gaping holes in some of the advocates’ narratives. In the retelling of an incident when Borarí’s life was threatened, we are never told how he escaped; nor are we told that the chief has traveled with police protection for 10 years due to constant death threats.

We also don’t learn enough about Pandey’s remarkable achievements at such a young age. At just nine years old, she filed a suit against the Indian government for their failure to meet their Paris Climate Agreement’s commitments and at 11, she attended the 2019 U.N. Climate Action Summit. Viewers should know about these impressive accomplishments.

But despite its shortcomings, « The Letter » contains poignant moments that recommend it to viewers. One involving Kandé is most memorable.

While with the group in Assisi, the hometown of the saint whose 1225 prayer « Canticle of the Sun » inspired his namesake pope’s letter, Kandé receives devastating news from Senegal through a video call with countryman Bilal Seck. Seck tells Kandé about the tragic fate of a friend who didn’t survive in a flimsy boat while trying to escape flooding at home. Emboldened by the news of the tragedy, Kandé tells his new companions in Assisi: « we need to create a strong bond and never break it. »

Such heart-rending stories enhance the film’s vital messages, and the postscript of « The Letter » — « How will you care for our common home? » — will provoke more to follow the inspiring examples of the featured advocates.