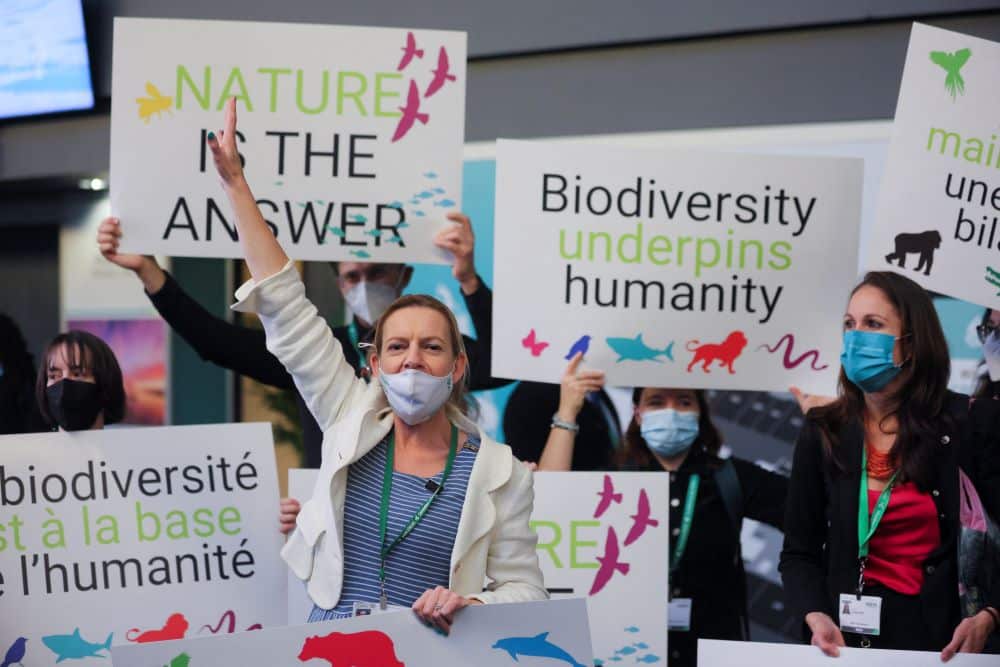 With scientists warning that the loss of nature is accelerating at dangerous speeds, Catholic activists are urging nations at the U.N. Biodiversity Conference in Montreal to act to protect life on earth at all levels.

From forests to oceans, animal species to tropical plants, unprecedented human activity is currently threatening biodiversity around the world. As a consequence, the earth is currently facing a triple crisis of climate change, nature and biodiversity loss, and pollution and waste, says the U.N. Environment Programme.

Prince Papa M’Kowiti, director of the African chapter of the Laudato Si’ Movement, said the findings underlined the urgency with which Catholics — guided by the teaching of the church — must act in caring for the common home.

« We must act to protect biodiversity so that we can protect our lives, » he told Catholic News Service. « Millions, if not billions, of organisms need us to stand up for them in the context of global climate discourse. »

Leaders from nearly 200 nations are meeting for the Dec. 7-19 biodiversity conference known as COP15.

« The meeting in Montreal provides an avenue to find avenues where nature’s role in combating climate change is likely to be realized, » the international Laudato Si’ Movement said in a statement.

M’Kowiti urged the world leaders at the conference to protect the most vulnerable in each community.

« We must ensure that the voices of Indigenous people are heard and given attention » during negotiations, said M’Kowiti. « Learning from the outcomes of the climate COP27 in Egypt, we must prepare to address the loopholes and the lack of political will that has often stalled the climate discourse. »

In the Western Hemisphere, Ima Célia Vieira, a researcher and adviser to the Brazilian branch of the Pan-Amazonian Church Network, or REPAM, struck a similar chord.

« We hope that COP15 ends with a strong and ambitious global agreement so that we can safeguard the biodiversity that we still have on the planet. The loss of species and ecosystems has been very sharp and rapid, and species extinction is forever, » she said.

Vieira said COP15 should guide actions aimed at biodiversity conservation until 2030. One of the main points is the guarantee of conservation of at least 30% of land and marine areas until 2030.

« The Amazon region has a prominent role in conservation because it has a third of the world’s biodiversity, » said Vieira, while recalling that more than half of the world’s remaining tropical forests were in the Amazon biome.

« We hope that a pact comes out (of COP15) that can really save humanity from the irreversible loss of species and ecosystems, » Vieira told CNS.

The impacts of biodiversity loss are grave in Africa. A recent study by the International Union for Conservation of Nature indicates that more than 6,400 animals and 3,100 plants in Africa are at risk of extinction. In 2014, the World Wide Fund for Nature said the population size of mammals, birds, reptiles, amphibians and fish had declined by 52% in 40 years.

At the U.N. conference, the Laudato Si’ Movement and a coalition of faith-based partners screened « The Letter, » the movie based on Pope Francis’ 2015 encyclical after which the movement was named.

On Dec. 12, the Laudato Si’ Movement presented the U.N. conference’s executive secretary a petition for a healthy planet, signed by 200,000 Catholics and 430 partner organizations. According to the organization, the appeal — collectively representing hundreds of thousands of Catholics from across six continents — supports Pope Francis’ call for urgent action on « our common home. »

The same day, the movement was distributing a letter from the Symposium of Episcopal Conferences of Africa and Madagascar, or SECAM. In the June letter, SECAM, the Laudato Si’ Movement and the Ecclesial Network for the Congo River Basin, or REBAC, called for the protection of the Congo Basin and an end to the construction of the East Africa Crude Oil Pipeline.

The letter said the Congo Basin was facing pressure from, among other things, conflict, illegal logging, land grabbing and industrial agriculture.

« We know that destroying even a quarter of the remaining untouched lands or polluting the oceans would remove the critical necessary carbon sink that is — without any cost to society — helping us avert the worst effects of a runaway crisis, » South African Bishop Sithembele Sipuka, SECAM first vice president, said in the letter.

Bishop Sipuka said the bishops were joining civil society in calling for « no biodiversity loss and for nations to commit to protecting half of the earth … to avoid the worst effect of the climate crisis. »

« We must say no to the proposed massive investment (by multinationals) in the oil and gas sector … which are displacing and wrecking the lives of the local people, » said M’Kowiti.

Contributing to this story was Lise Alves in Brazil.