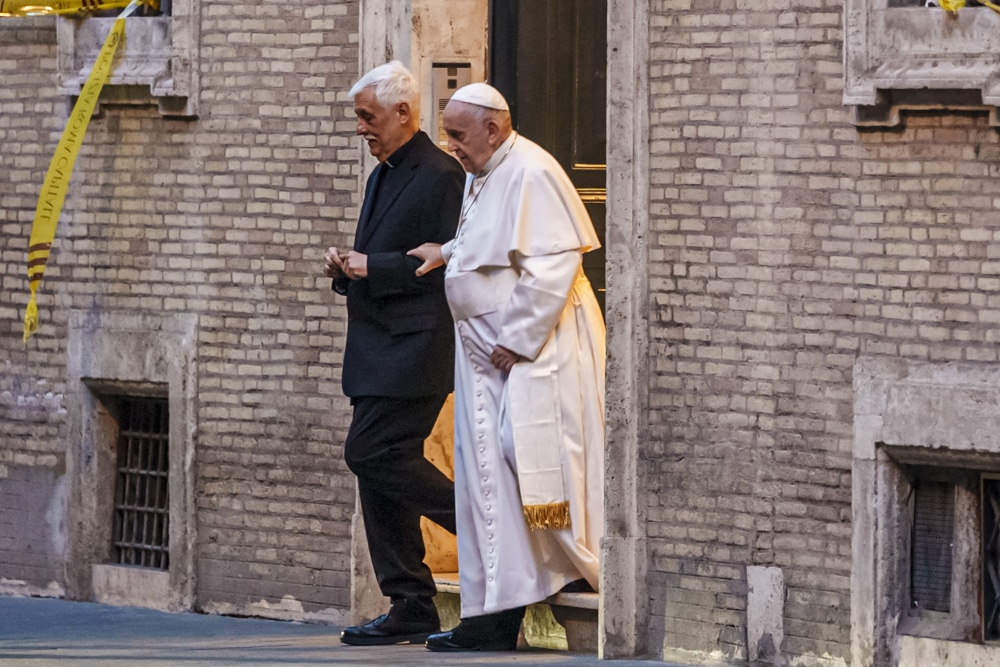 Pope Francis’ Jesuit order on Nov. 18 asked any more victims to come forward with complaints against a famous Jesuit artist who was essentially let off the hook by the Vatican twice despite devastating testimony by women who said he sexually and spiritually abused them.

The Jesuits asked for new evidence against the Rev. Marko Ivan Rupnik, and offered a timeline about his case in an effort to tamp down the scandal.

The Slovenian priest is relatively unknown among rank-and-file Catholics but is well known in the hierarchy because he is one of the church’s most sought-after artists. His mosaics decorate chapels, churches and basilicas around the globe.

The scandal exploded this past week after the Jesuits admitted he had been excommunicated for having committed one of the gravest crimes in the Catholic Church — using the confessional to absolve a woman with whom he had engaged in sexual activity.

He was declared excommunicated in May 2020, but the Vatican’s Congregation for the Doctrine of the Faith lifted the excommunication later that month after he repented, an unusually quick turnaround for such a serious violation.

A year later, the same Congregation decided not to prosecute him for another allegation of spiritual and sexual abuse of a former nun, declaring the statute of limitations had expired. The Congregation, which routinely waives the statute of limitations, is headed by a Jesuit prefect, has a Jesuit sex crimes prosecutor and a former No. 2 who lived in Rupnik’s Jesuit community.

The Congregation has not responded to requests for information about the case, which has exposed the Vatican’s general refusal to consider spiritual and sexual abuse of adult women as a crime that must be punished. Rather, the Vatican has long considered such abuse a mere lapse of priestly chastity that can be forgiven, without considering the trauma it causes victims.

The Jesuit appeal came on the same day the Italian newspaper Domani published the most explosive testimony yet by the former nun who made the complaint in 2021. She detailed years of sexual abuse and spiritual manipulation by Rupnik and said she made repeated efforts to turn him in only to face Jesuit and other superiors who routinely protected Rupnik at her expense.

“It was truly an abuse of conscience,” said the nun, who was not identified but whose account was confirmed to The Associated Press by someone familiar with the case.

“His sexual obsession was not impromptu but was profoundly connected to his concept of art and his theological thinking. Father Marko started slowly and sweetly infiltrating my psychological and spiritual world, leveraging my uncertainties and fragility and using my relationship with God to push me into sexual experiences with him.”

She said that her first complaint about his behavior dated from 1994 in Slovenia but that it was ignored as Rupnik’s community — first in Slovenia, then in Rome — grew and gained an international following.

In the meantime, other sisters were similarly harmed, she said, describing the use of pornography, humiliation and multiple partners “in the image of the Trinity” in Rupnik’s spiritual and sexual abuse.

The scandal has been accentuated by conflicting accounts given by the Jesuits.

After the first allegations of the 2021 complaint were aired in Italian blogs and websites this month, the Jesuits issued a statement only referring to the 2021 case. But under questioning by AP at a Christmas reception, the Jesuit superior, the Rev. Arturo Sosa, admitted Rupnik had previously been excommunicated for the confession-related crime.

On Nov. 18, Rupnik’s immediate superior, the Rev. Johan Verschueren, said he wanted to try to clarify some of the questions that have erupted about the case. In a statement, he appealed for anyone with old or new allegations to come forward. He provided an email address: teamreferente.dir@gmail.com.

“My main concern in all of this is for those who have suffered, and I invite anyone who wishes to make a new complaint or who wants to discuss complaints already made to contact me,” he said.

He said complaints would be accepted in English, French, Italian, Spanish, Dutch and German.